It’s a busy over here today, this is the first blog tour stop of three and they are all great!

Anyway, this one is the brilliant second book in the PI Charlie Cameron series by Owen Mullen and I have an amazing extract for you, but first, here’s the blurb . . . 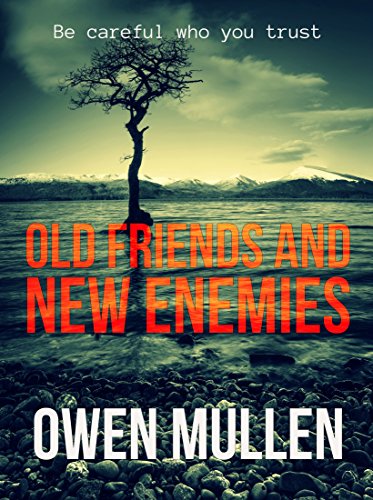 The body on the mortuary slab wasn’t who Glasgow PI Charlie Cameron was looking for.

But it wasn’t a stranger.

Suddenly, a routine missing persons investigation becomes a fight for survival. As Charlie is dragged deeper into Glasgow’s underbelly he goes up against notorious gangster Jimmy Rafferty and discovers what fear really is.

Rafferty is so ruthless even his own sons are terrified of him.

Now he wants Charlie to find something. And Jimmy Rafferty always gets what he wants.

There is only one problem… Charlie doesn’t know where it is.

They dragged him from the boot of the car, down an embankment to the shore; gagged, bound and blindfolded. His feet scraped grass and stones; a shoe came off and was left behind. At the jetty, Kevin Rafferty waited in the boat. In a long career of violent persuasion this guy had been the hardest to break. But it wouldn’t last. When the blindfold came off he’d realise the loch was to be his grave. Then the begging would begin because pain and death weren’t the same.

And he’d tell. Everything. It never failed. Plastic ties fastened the victim’s wrists to hooks hammered into either side of the gun-wale, holding him upright. His head moved, blindly drawn to every sound. With what he’d been through – the beating, the burns, the loss of blood – it was a miracle he was still breathing. Rafferty turned up his collar, dipped the oars in the water and started to row. After a while he stopped. Late afternoon drizzle falling from a grey sky stippled the calm surface, they would drift, but not much. He released the blindfold.

They stared at each other. Rafferty broke the spell. He opened a canvas bag that lay across his knees, slowly, so the man could see the knives, the screwdrivers, the pliers: his tools. On top he placed a bolt cutter and patted it as he would a faithful dog. The thief moaned and fought against the restraints, wild terror in his eyes. The cutter trapped the first finger of his right hand between the blades. He began to cry. ‘Last chance,’ Rafferty said. The blades tightened, a muffled wail came from behind the gag. ‘Sure? Okay.’ A thin red line appeared at the joint. Rafferty sighed fake regret. ‘This little piggy went to market…’ An opal moon hung above the loch, it had stopped raining and the night sky was clear. The thief was slumped forward, passed out. They’d been at it for hours – or five fingers – he should be pleading for his life. Better yet he should be dead. In Glasgow, Rafferty understood it wasn’t going to be easy. Something wasn’t right about this guy. He didn’t get it. Kevin’s job was to make him get it. He peeled the sock from the shoeless foot, bleached like a corpse in the moonlight, and lifted it into position. For the moment the gag was unnecessary, he ripped it away and waited for his victim to come round; when he did it would continue. A noise took him by surprise. He tensed. At the other end of the boat the head came up, eyes blazed in the gloom and the madman grinned at him through broken teeth. ‘I’m starving,’ he said. ‘What…what?’ ‘Could murder a curry.’ Rafferty’s voice cracked with desperation. ‘What did you do with the money?’ ‘Chicken Tikka.’ This was insane. ‘The money! Where is it?’ The thief spat blood and sniggered. ‘Fuck off.’ Rafferty snapped. He grabbed a knife and buried it in the crazy bastard’s heart. No,’ he said, ‘you fuck off.’ The body rolled over the side and disappeared into the dark water, Rafferty gathered the severed fingers and threw them after it; food for the fish. At the jetty, he got out and stood for a long time watching the untethered boat float away. He had been so confident, so sure. But it hadn’t worked out. He was going back with nothing. The thought of telling his father made Rafferty sick with fear – more afraid than the man he had just killed had ever been. Jimmy would go mental.

Ooofff! I don’t know about you but I think this sounds pretty flipping amazing!