Skip to content
Evil Games is probably my favourite Kim Stone book, I first reviewed it on my old blog a year ago today and I just had to share it with you all!

Bookouture (29 May 2015)
The Blurb
The greater the Evil, the more deadly the game…
When a rapist is found mutilated in a brutal stabbing, Detective Kim Stone and her team are called in to bring a swift resolution. But as further disturbing events come to light, it soon becomes clear that there is someone even more sinister at work.
With the investigation gathering momentum, whilst also trying to expose the secrets of a sick paedophile ring, Kim finds herself in the sights of a lethal individual undertaking their own twisted experiment.
Pitted against a dangerous sociopath who seems to know her every weakness, for Detective Stone, each move she makes could be deadly. As the body count starts to mount, Kim will have to dig deeper than ever before to stop the killing.
And this time – it’s personal.. . .
My thoughts . . .
Well, what I can say?
After reading Silent Scream in one sitting and being blown away by Marsons’ writing, I wasn’t sure if this second instalment would live up to the same level of brilliance … I’m so glad that it did!
In Evil Games, DI Kim Stone and her team are back and working on the case of the Dunn family, who have just been torn apart after an eagle eyed teacher realised that daddy was being more than just a good daddy. Now, the CPS have decided that they may not have enough evidence and may throw the case out, Stone and the team are frantically trying to tie up any potential loose ends to ensure a conviction. Then, following the discovery of a dead body, seemingly an unprovoked attack on an innocent man, we are introduced to Dr Alex Thorne and my gosh, what an absolute bi*ch she is!
The Dunn family are going through hell, their daughters are involved in a paedophile ring, the 2 little girls are taken into care and all this brings back memories for DI Stone, deep buried memories, once again forcing her to look at her past and all those feelings she has boxed away.
To be able to render a reader to feel such hatred towards a fictional character is an amazing skill and Marsons has it in buckets. She clearly researched every inch of the world of psychology and sociopaths and created a character beyond loathsome. Dr Thorne uses her skills as a psychologist to manipulate the vulnerable but how and, more importantly, why?
I found Dr Thorne absolutely fascinating, the insights into the workings of the human mind that Marsons brings to the table are brilliant.
DI Stone is cold and hard and harsh, she doesn’t mince her words, she doesn’t fake emotions, she doesn’t suffer fools but she doesn’t share either, and when her past starts to be brought into the present, we start to see more of that softer side, the surprisingly sympathetic elements which we saw glimpses of in Silent Scream. DI Stone is so eloquently written, the layers Marsons has created to build up this broken girl and create a woman with such a fierce determination to ensure that justice is brought to those who deserve it, are so deep and meaningful, she is a delight to read, and it really is a pleasure watching how she is starting to let those defences down, little by little.
Marsons could very easily have used each of these plots in their own books and delved into each story line a lot deeper and for a lot longer, and in all honesty, parts of me wished she had, however thinking about it, that’s not real is it? Criminals don’t gather together at the start of the month and decide who will commit their crimes and when, they don’t create a schedule so that the police have the time to investigate and solve one before moving on to the next, the police force aren’t that lucky! And, thinking about it some more now, I’m actually glad that this happened, it’s not very often you get a story in which the different plots don’t end up twisted together and that was really refreshing!
I want to talk and talk and talk about Dr Thorne for ages but it’s too hard to discuss her without giving anything away, so I will leave her for now and let you discover for yourself, just look out for her and be warned … You will love to hate her and Angela, if you read this, please please please don’t let that be the last we see of her! She would be my vote for the Dead Good Readers Dr Lecter Award for Scariest Villain without a shadow of a doubt!
Evil Games made me laugh out loud (the famous larger advert reference), cry (too many parts to mention) and made me hate (Dr Thorne and … read it and find out!), there are lots of things going on in this book, twists that had me gasping out loud on the bus, turns that made me want to scream and an ending that left me desperate for more.
You will not put this down, you will not sleep and you will love every second of it!
I would like to thank myself for buying this book (Emma you are great!), I was kindly sent Silent Scream (book 1) and Play Dead (book 4) by Net Galley and Bookouture and, as Evil Games is book 2 I didn’t want to read them out of sequence. That is totally my preference though, each of these books works brilliantly as a stand alone novel.
You can buy your copy over at Amazon
About the author . . . 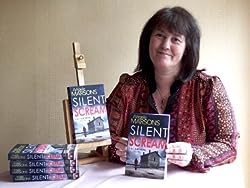 Angela Marsons is the author of Amazon #1 Bestseller SILENT SCREAM.

She lives in the Black Country with her partner, their bouncy Labrador and a swearing parrot.

After years of writing relationship based stories (My Name Is and The Middle Child) Angela turned to Crime, fictionally speaking of course, and developed a character that refused to go away.

She is signed to Bookouture.com for a total of 8 books. The second, third and fourth books in the Kim Stone series, EVIL GAMES, LOST GIRLS and PLAY DEAD are also now available.